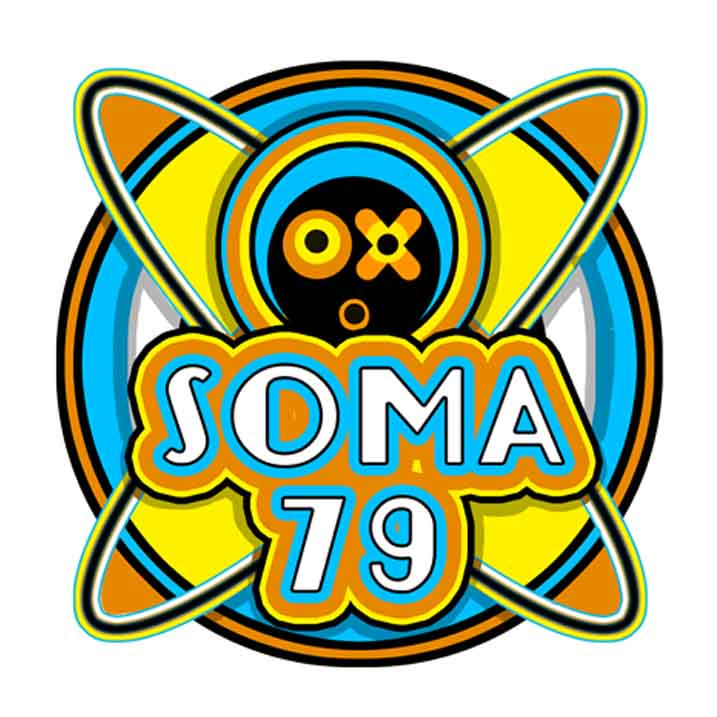 Your shopping cart is empty.

Your shopping cart is empty.

Thank you for visiting Soma79.com.  The art here spans over a decade of work, with new pieces being added regularly.

The first question I often get: where'd the name Soma79 come from?  Long story short, Soma79 is not the name of a brand or a store, I am a real person... contact me here through the site with any questions or just to talk art.

For the past several years I have dedicated myself to creating new art every single day, which is why Soma79.com is overflowing with a wide variety of both original artwork and prints, including paintings, drawings, portraits and collages, as well as animal and travel photos from around the globe.  I am also available for commissions, so please contact me directly with your ideas.

Over the years my artwork has taken many forms.  I studied film at Boston University, and shortly thereafter served as associate producer of award winning short film "Across the Hall", directed by Alex Merkin and starring Adrian Grenier.  I have also written several unproduced short and feature length screenplays.

Next, I spent several years producing hip-hop music.  I released my debut solo album "Broadcasting from Channel 79" in 2010.  Following that I co-founded the hip-hop group, Mic Monarchy, whose unreleased debut album "Breach" is still floating around somewhere.

As that came to an end around 2010 I starting picking up painting and drawing again, first with comic book characters and graffiti-inspired cartoonish figures, and then moving into creating larger abstract pieces.  As I learned more I began adding in elements of collage and stencil work, in the process going through many roles of masking tape.

Around the end of 2014 I hit a stumbling block on a painting that I was creating.  I had seen a photograph of Dwayne "The Rock" Johnson holding a koala bear.  Something about that image was very interesting to me, so I decided to capture it in a painting.

My idea was to first cover a large canvas in clippings from the New York Times.  Once I laid down the newspaper and began to draw the image of The Rock and the koala over it, something went wrong: it sucked.  I kept redrawing it, but it still didn't look like the Rock.

As 2014 drew to a close I started thinking about my New Year's Resolutions.  Every year I try to make several, at least a few of which I stick with.  With my Dwayne "The Rock" Johnson frustration fresh in my mind, I decided that in 2015 I would dedicate myself to drawing a full portrait in pencil every single day in that year (also known as a Project 365).

I learned a lot about time management and never missed a day.  During that year I also illustrated my first published children's book and completed several new paintings, collages and commissioned pieces.  I was also finally able to finish my Dwayne "The Rock" Johnson and a koala bear piece, "The Rock and a Soft Place", which currently hangs in my living room.

This piece, as well as several of my Project 365 portraits, is available for purchase as a print on this site.

I continue to work on art every day and find new ways to challenge and express myself.  Come back to visit www.soma79.com often to see what I'm working on now.

This presence of this badge signifies that this business has officially registered with the Art Storefronts Organization and has an established track record of selling art.

It also means that buyers can trust that they are buying from a legitimate business. Art sellers that conduct fraudulent activity or that receive numerous complaints from buyers will have this badge revoked. If you would like to file a complaint about this seller, please do so here.

The Art Storefronts Organization has verified that this business has provided a returns & exchanges policy for all art purchases.

All prints are created and shipped from Skyline Printing, and are therefore subject to their shipping and returns policy. Please click here for more information. I offer a 60 day money back guarantee on all original art, minus a 10% restocking fee. Purchaser must also pay for return shipping and insure the artwork for the value of the purchase. All artwork being returned must be in original condition and repacked in the same way as it was originally received. Contact me at soma79@soma79.com prior to returning artwork to discuss arrangements.

This website provides a secure checkout with SSL encryption.

This is only visible to you because you are logged in and are authorized to manage this website. This message is not visible to other website visitors.

The above preview shows how to use the live preview on this website. The image displayed is just an example, and is not available for sale.

This means you can use the camera on your phone or tablet and superimpose any piece of art onto a wall inside of your home or business.

To use this feature, Just look for the "Live Preview AR" button when viewing any piece of art on this website!

Below, select which favorite lists you would like to save this product into.

SAVE 20% ON YOUR FIRST ONLINE ORDER!

This offer is valid for NEW SUBSCRIBERS only!

We will respect your privacy and will not spam you or sell your information to anyone else.

<p> Cookies are important to the proper functioning of a site. To improve your experience, we use cookies to enable shopping cart functionality, to remember log-in details and provide a secure log-in, to collect statistics to optimize site functionality, and deliver content tailored to your interests. Click "Accept" to accept cookies and go directly to the site, or click on "Learn More" to learn more about our Privacy Policy before accepting. </p>

If you change your mind, click here to modify your decision